Pattaya originated thanks to American soldiers, as 500 soldiers arrived in Pattaya on June 29, 1959 for a week-long vacation. They spent their time near what is now Walking Street, where bars had appeared there a few years ago. Word of their vacation spread and soldiers arrived in Bangkok and Pattaya for the holidays throughout the Vietnam War.

After the war, Pattaya gradually began to attract ordinary tourists, and the area has grown and developed from a small fishing village to a large area on the shores of Pattaya Bay. Pattaya Bay can be admired on the sandy beach, which is not one of the best in the area, and you can even feel it by speedboat to explore the sandy beaches and islands of Pattaya Bay. In addition to what the bay has to offer, Pattaya has a botanical garden but there is quite a bit else completely organic around it. 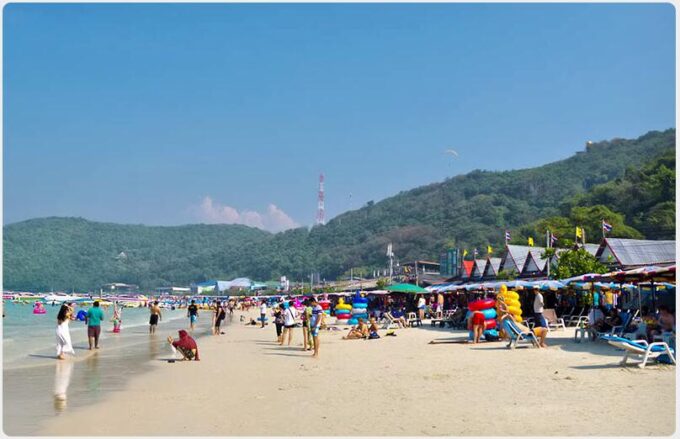 The beaches of the Pattaya area

Pattaya is a well-known beach resort, although in practice it is so hot even in the coolest time of the year, December-January, that few people lie in the sun and shade is more common. However, the beaches are important, and they are especially popular in the afternoons, when the heat is not like noon and when it usually gets a little cloudy.

On Pattaya’s main beach and many other beaches, Wednesday is a day of rest when beach chairs and beds are not put in place and there are almost no services on the beaches. The beaches still have the same atmosphere as there was in Spain and elsewhere in southern Europe in the 1980s, meaning that a wide variety of traders wander around and sell all kinds of food, drink or eye-catching. You can get to the beach chair after paying 40-100 baht for staying until the evening. Different parts of the beaches have different dishesso that you should look at the food and beverage list before paying the entrance fee. Food and drinks are somewhat more expensive than elsewhere, but they are still reasonably priced and other services are available, such as massages, nail clippings or other pedicures.

Pattaya’s central beach is at the end of the main street, Walking Street and the so-called in the middle ground of the dolphin roundabout. The south side, where Walking Street is located and which is the harshest place in Pattaya night and day, is not to the liking of beach people, and it is calmer between the main street (Central Pattaya Road) and the dolphin roundabout. The roundabout is a convenient place in many ways, as baht buses run from there towards Naklua and other places.

This whole long beach is quite lively from morning to night, but is spoiled by hundreds of charter boats anchored or cruising around the beach. As a result, the water is dirty and this is not a good place to swim or practice water sports. However, the beach in the heart of Pattaya is quite a good place to land in the shade or in the sun, relax, eat or drink something and observe the actions of Westerners living permanently in Pattaya as they form the kind of city center that gets attention during your stay.

At the other end of Walking Street and Pier, by the lighthouse, is the small Leam Bali Hai. It has good panoramic views and is good for taking a picture at sunset. It is a popular place to come for an early evening workout, but there are also sun worshipers and other relaxers throughout the day. 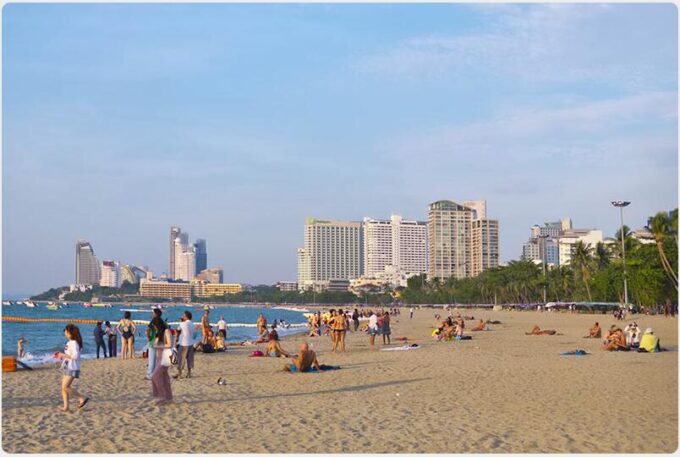 Jomtien is a well-known beach resort, where it is quieter than in the heart of Pattaya and where you should go for a traditional beach holiday. On its shore it is possible to do everything, there are enough services and there are few side effects. To its south, Hat Dongtan is a gay- and lesbian-friendly beach that others shouldn’t go to. The area can be reached from the heart of Pattaya by baht bus, which can be reached even in front of the Central Festival or on the corner of Walking Street.

Naklua is a German-favored beach resort north of the heart of Pattaya, and its beach is similar to that of Jomtien, meaning it has many services and entertainment opportunities and relatively few side effects. Naklua Beach is seamlessly connected to Wong Amat Beach, one of the most isolated in the area, and this beach is very close to the heart of Pattaya. Nakluaa can be quickly reached from the heart of Pattaya by baht bus, which can be reached even at the dolphin roundabout.

The best beaches around Pattaya are on the islands . Koh Lan in particular is a paradise place to go to a fine, clean beach even for the whole day, and you can also do everything there. Information on Koh Lan can be found on the Pattaya Area Attractions page.